As we continue our pandemic journey that is 2021, more and more people are getting vaccinated against COVID-19. Once vaccinated, people are (finally!) able to do more “in the real world.” However, in some cases such as international travel, there is a need to prove that you have been vaccinated before you can participate. In the past, that proof has been accomplished in the form of the paper World Health Organization Carte Jaune/Yellow Card. But in our 21st century pandemic, a handwritten paper document is not particularly trusted. It’s just too easy to buy or make your own. The sudden, urgent need to be able to prove health information in a safe, privacy-preserving and secure way has brought the spotlight on the concept of verifiable credentials and, for Hyperledger, on the three identity-focused projects in the community, Indy (a distributed ledger for identity), Aries (data exchange protocols and implementations of agents for people, organizations and things), and Ursa (a cryptographic library underlying Indy and Aries).

While people understand that paper credentials are insufficient and that a trusted digital solution is needed, they don’t understand why verifiable credentials, or more generally, identity, works extremely well with distributed ledger technology (DLT)—a distributed database spread across multiple nodes, of which blockchain is an example. To be clear from the start, it is not to put the credentials on a public ledger so everyone can see them! We’ll reiterate that a lot in this post. No private data ever goes on the blockchain!!!

To understand why DLT is useful for identity, we need to go back to the basics—paper credentials, how that model has worked for 1000s of years, and how the use of DLTs with verifiable credentials allows us to transition the great parts—security and privacy—of that model to the digital age.

Since as far back as 450BC, people have used paper credentials to enable trusted identity. Legend has it that King Artixerxes of the Persian Empire signed and gave Nehemiah a paper “safe transit” authorization that he used in travels across the empire. People have been using such documents ever since. In technical terms, a credential is an attestation of qualification, competence, or authority issued to an entity (e.g., an individual or organization) by a third party with a relevant or de facto authority or assumed competence to do so. Examples of credentials issued to people include a driver’s license, a passport, an academic degree, proof-of-vaccination and so on. Credentials are also issued to companies, such as business registrations, building permits, and even health inspection certifications.

The Paper Credential Model
By Peter Stokyo, peter.stoyko@elanica.com, Licensed under CC By 4.0

The caveat “ideally” is included because of the real possibility of forgery in the use of paper credentials. Back to our “proof-of-vaccination” problem.

As we’ll see, verifiable credentials and presentations are not simple documents that anyone can create. They are cryptographically constructed so that a presentation of the claims within a credential proves four attributes:

Unlike a paper credential, those four attributes are evaluated not based on the judgment and expertise of the person looking at the credential, but rather by machine using cryptographic algorithms that are extremely difficult to forge. Like the paper credential, the verifier does not go back to the issuer to ask about the credential being presented. Only the prover and verifier, the participants in the interaction, need to know about the presentation. So where do the prover and verifier get the information they need for their transaction? We’re just getting to that… 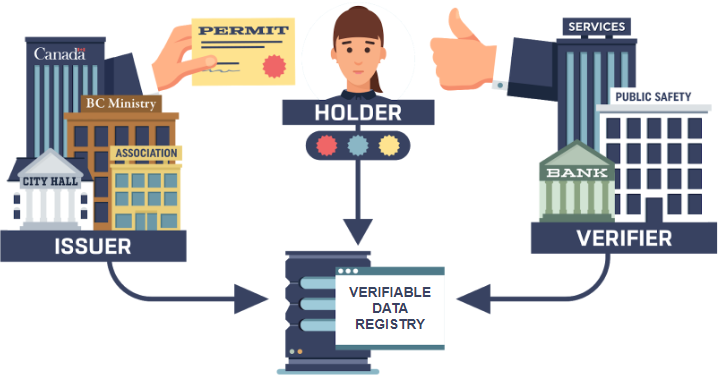 The Verifiable Credentials Model
By Peter Stokyo, peter.stoyko@elanica.com, Licensed under CC By 4.0

Compared to the paper credentials model, verifiable credentials are far more secure. When the cryptographic verification succeeds, the verifier can be certain of the validity of the data—those four attributes stemming from verifying the presentation. They are left only with the same question that paper credentials have—do I trust the issuer enough

So where does the DLT fit in?

Three of the four things that the verifier has to prove (listed above) involves published data from the issuer that has to be available in some trusted, public distributed place, a place that is not controlled by a central authority (hmm…sounds like a DLT!). In Indy and Aries, data published to a DLT is used to verify the credential without having to check with the issuer. In particular:

The fourth attribute (the binding of the credential to the holder) in Indy is done using some privacy-preserving cryptographic magic (called a Zero Knowledge Proof) that prevents having a unique identifier for the holder or credential being given to the verifier. Thus, no PII is needed for sharing trusted data.

So why DLT? First, we can get the good parts of paper credentials—private transactions between holders and verifiers and no callback to the issuer. Second, the issuer gets a trusted, open and transparent way to publish the cryptographic material needed for those private holder-verifier transactions. Third, there is no need to have a “Trusted Third Party” participating in the interactions.

And did I mention, no private data goes on the DLT!!!

Hyperledger Indy, Aries and Ursa are enabling this approach to “self-sovereign identity” in a big way,  bringing about a new layer of trust on the Internet that will let us preserve our privacy and give us control over our identity and data—where it belongs. There is a lot to learn. If you’re curious, a great place to start is this Linux Foundation edX course.